Apple recently rolled out its new flagship operating system iOS 7 across its platforms. The iPhone and iPad in particular were in need of an iOS overhaul since there had been much speculation that the piecemeal updates of recent months had slowed down phone performance, rather than increase functionality. It is therefore no surprise that when Apple launched the iPhone 5, they had iOS 7 up their sleeves. Many changes had taken place but one in particular caught many peoples eye. This was the ability to choose advertising served by interest.

Now this may not seem like such a big deal, but what exactly is Apple up to? Mobile advertising is now accounting for more than 60% of online ad spending. Why? Because mobile advertising offers three key advantages,

1: They are highly geographical targeted.

2: They are served to a trusted customer (age, location and address are almost guaranteed with a contract cell phone). 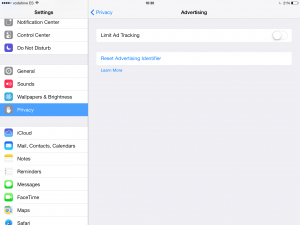 Apple announced themselves in 2012 that none customer focused geographical based adverts in apps would be banned. In other words, if location wasn’t an important part of the game play in the app, then serving location based ads would not be allowed. Many have seen this a way for Apple to increase its iAd legroom. iAD of course being Apples in house portal for serving ads through 3rd party apps in the Appstore. Apple insist it’s purely to serve relevant ads to customers and retain healthy customer relations. Either way Googles own Android ad serving platform through IMOb is probably going to follow since they don’t want to be seen as spamming customers in the wake of Apple taking a firm stance on such matters.

Companies looking to target ads to mobile consumers are actually better positioned to do so. Since this new iOS 7 feature allows mobile users to funnel ads dependant on interest, and will technically allow advertisers to target their ads within even greater accuracy.

Geographical based ad serving is as old as the guy with a sandwich board telling you the local café has tomato soup as today’s special. But with the new ad platforms emerging and the mobile market attempting to finitely target those ads. We could see a time where every advert is sent to the relevant consumer at the right time, in the right way.

Although this would indeed be the holy grail of the advertising world.